Human beings possess a system called “immunity” to protect the body. Our body is under daily threats such as bacteria and viruses. Immunity is a system to protect our body from such threats. Immunity can be broadly divided into “innate immunity” and “acquired immunity.” Innate immunity is a system that oversees the body at all times, and first detects and addresses any abnormality. Acquired immunity is a system that memorizes a threat once it occurs and serves to prevent it from recurring, and functions efficiently and specifically against memorized foreign bodies. External threats such as bacteria or viruses are not the only threats from which immunity can protect the body. Immunity can also protect the body from cancer cells or abnormal cells that have appeared inside the body. “Cancer cells” may be associated with a serious image. However, cancer cells develop in our body every day. As these cells are recognized and eliminated by the immune system, our body can maintain a healthy state without developing cancer. A failure to address cancer cells due to reduction in immunity leads to cancer development.
Thus, “immunity” is a system to protect the body against various threats such as viruses, bacteria, and cancer cells. However, as immunity reduces with age, the risk of infection or cancer increases as time goes on. For this reason, the daily enhancement of immunity is important in preventing infection or the development of cancer.

“Surgical therapy,” “radiotherapy,” and “chemotherapy” are the current mainstream therapies for cancer and are called the three major cancer therapies. Each type of therapy has its own advantages and disadvantages, and there is no single therapy that provides a cure for any cancer.

Surgical therapy involves the removal of a cancer lesion with a scalpel. Although it is effective against cancer localized in a single site, it is difficult to address metastatic cancers with this type of therapy. In addition, due to its surgical nature, it imposes a burden on the patient and requires the patient’s physical strength.

Radiotherapy kills cancer cells with the high destructive power of radioactivity based on the higher radiosensitivity of cancer cells in comparison to normal cells. It eliminates the need for laparotomy and can, therefore, be performed even on elderly patients or patients with decreased physical strength. In addition, an intriguing result, called the abscopal effect, is expected in which cancer regression is observed at a site remote from the irradiated site. However, normal cells around cancer cells are also killed, leading to the occurrence of adverse reactions. In recent years, techniques to focus irradiation on cancer lesions, including heavy particle radiotherapy, have been developed to reduce adverse reactions. Possible adverse reactions include nausea, malaise, decreased appetite, and decreased white blood cells.

Chemotherapy is a type of therapy using anti-cancer drugs. Based on higher proliferative properties of cancer cells in comparison to normal cells, chemotherapy employs drugs that can kill higher proliferative cells. As it is based on the proliferative properties of cells, it exhibits toxicity to normal cells or tissues with similar properties (including bone marrow cells, lymphocytes, hair root cells, and intestinal epithelial cells), potentially leading to adverse reactions. In contrast to significant adverse reactions, chemotherapy has a high therapeutic efficacy in some types of cancer, such as myeloid leukemia and malignant lymphoma, although 5-year survival rates (a proportion of patients surviving at 5 years after diagnosis) in various types of cancer are not high. 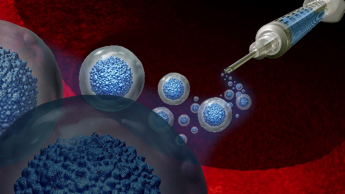 Recently, in addition to the three major therapies, immunotherapy has been considered as the fourth therapy. Immunotherapy involves isolating immune cells from the patient’s blood, expanding the cells, and returning activated cells back into the body. It enhances the body’s immunity and improves the inherent ability of the body to kill cancer cells. In addition, it can remove cancer cells with enhanced immunity and is also effective when used in combination with other cancer therapies. Given that all of the three major therapies are associated with adverse reactions reducing immunity, such as decreased white blood cells and decreased physical strength, it can reduce adverse reactions and improve the patient’s quality of life (QOL) when used in combination with immunotherapy. Additionally, the abscopal effect, a phenomenon of cancer regression remote from the irradiation site, is attributed to immune function. Weakened cancer cells due to irradiation secrete proteins or antigens that stimulate immune function, resulting in the stimulation of immune cells in the body, providing anti-tumor activity at various sites. Thus, the combination of radiotherapy and immunotherapy is expected to not only reduce adverse reactions due to individual enhanced anti-cancer efficacy and improved immunity, but also offer a synergic effect resulting from the abscopal effect.

NKM Immune Cell Therapy is a unique type of immunotherapy developed by Oda Clinic. It uses mainly “natural killer (NK) cells,” which are responsible for innate immunity, mixed (M) with “T-cells,” which are responsible for acquired immunity, in an appropriate ratio. Compared with commonly used immunotherapy, in which cell culture is focused on a single type of cells, NKM Immune Cell Therapy adopts various immune cells to draw the properties from each of the cells. Expansion of natural killer (NK) cells builds up natural immunity to enhance the front line of defense, a basis of immunity. At the same time, the adoption of T-cells builds up acquired immunity to enhance the ability to prevent recurrence by memorizing a foreign body that has once entered the body. In addition, as T-cells not only build up acquired immunity, but also can proliferate and activate immune cells, mixed culture boosts both innate immunity and acquired immunity to provide a higher-quality immune cell therapy.

Expected benefits associated with improved basic immunity include the prevention of cancer development, improvement of weak constitutions, and radical cure of viral diseases.

As cells extracted from the patient’s blood are used, the risk of adverse reactions such as rejection is considered to be low. Some fever may occur.

Although the flow of therapy varies depending on the patient’s symptoms, the basic flow of NKM Immune Cell Therapy is shown below. Immune cells are isolated from a collected blood sample and are cultured for about two weeks, after which the cultured cells are administered to the patient. Several doses of immune cells are administered at intervals of about one to two weeks. For standard therapy, one course consists of about two to three months, during which five to six doses are administered. After the completion of one course, it is determined whether or not to continue therapy at the physician’s discretion.

6.Fees and method of payment